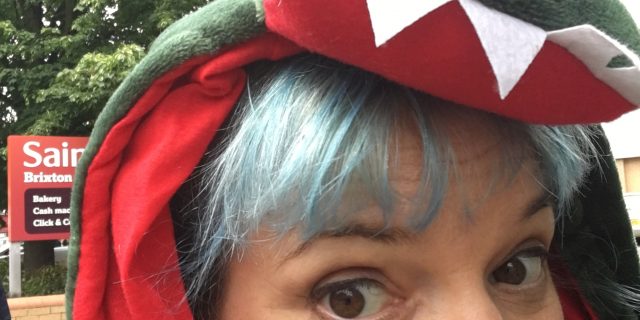 Dressing up, the more foolish the better, is something that has always been a ‘thing’ for me. Possibly a hangover from my heavily adorned teenage goth years.

During my 90s/00s clubbing nights, after parties back at mine usually featured a number of costume changes for my friends as we riffled through my ever increasing dressing up box. At Glastonbury I would end up buying an unlikely dress or hat – most notably a floor length 80s Dynasty style evening dress with ruffle neck and hem which became so mud covered it was weighed down and ripped to my knees.
Forward to the creation of Big Fish Little Fish five years ago and I decided that everyone should once again be encouraged to let loose and reveal their inner pirate/alien/tiger/superhero by way of a dressing up theme for each event. It has been suggested that the themes are sometimes dictated by what new nonsense I have found to wear.  I couldn’t possibly comment.
The BFLF events have meant I now have a run of photos of  ‘Hannah-in-fancy-dress-with-DJ’ . The first one was this of me dressed as a dalek with Mixmaster Morris #lifegoalsyoudidnotknowyouhad. 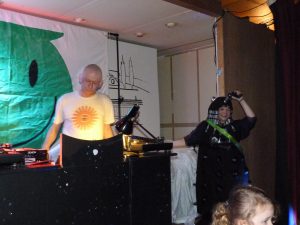 The costume was from Woolworths for a 12 year old.  I can’t find it now. How on earth it became lost in my house I’ll never know.  For space ones now I have an Original Star Trek Red Shirt. 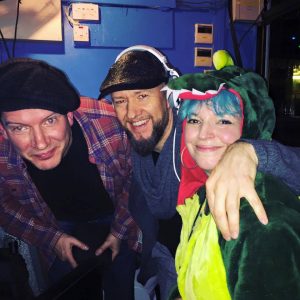 I also like this one of me as a dinosaur with DJs Tom Middleton and Will Nicol. Who else can say they have a photo like that eh?
I managed to persuade the DJs to join in – Alex Paterson in a Santa hat, Slipmatt as a pirate, Jacob Husley as a vampire and DJ Trax as a full on wizard (the hat got in the way of headphones and the sleeves got in the way of mixing). 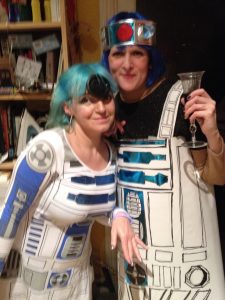 I still gather my clan of friends every New Year’s Eve for a party at ours – and give them a dressing up theme.

These are not the droids you are looking for. 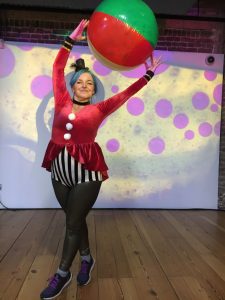 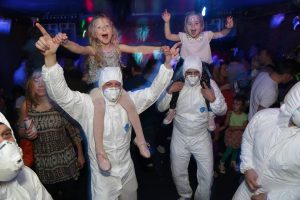