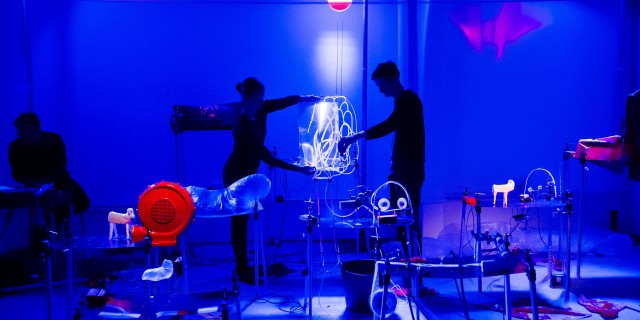 One of the great privileges of parenthood is getting to go to kids’ theatre. Obviously, it can be terrible and slapdash, and we’ve certainly seen a few stinkers, but once you get the hang of it and know where to go, there’s a special kind of magic that doesn’t exist in other art forms. By definition something that successfully entertains and speaks to young kids will generally be something that magnifies and reflects their imaginative world back to them – with all the surrealism, quantum leaps of invention, dissolving of categories and occasional wildness that entails.

We’ve seen a few great shows lately: I Want My Hat Back at the National (which among many great qualities featured a dreamlike live score by Arthur Darvill aka Rory from Doctor Who, dressed in shorts, tights and antlers), The Lorax at The Old Vic, and quite a few at The Unicorn including our favourite, The Secret Life Of Suitcases. And we were very excited to try out some of the programme at the Mini Vault festival, knowing already what a fun venue it is from the previous week’s BFLF.

There’s something about the informality of the Waterloo Vault – the rough walls, the trains rumbling overhead, the feeling of stepping out of the real world into something a bit other – that creates a sense of unpredictability. But even so we couldn’t have possibly guessed what A Pony For Your Thoughts was going to be like: after all, New Zealander Trygve Wakenshaw was previously only known for grown-up and occasionally slightly disturbing physical comedy – how would his style translate to an audience of under-tens?

Simple answer: he performed massively, massively childish and occasionally slightly disturbing physical comedy. As Sherrif Bigbottom, he came onto a messy stage, looked confused, goofed around, dropped his trousers, goofed around some more, was joined halfway through by an actress playing a hilariously deadpan cat, and it was incredible. The duo consistently blurred the boundaries around their performance: it was never quite clear what they were making up as they went along, and there were some moments where they threatened to gallivant blithely into the realm of the thoroughly inappropriate – particularly when Sheriff Bigbottom tried to pull his trousers up over a plastic rocking horse – yet somehow they kept the whole audience, kids and adults alike, with them, and kept us in fits of laughter. It was clowning reinvented, completely delirious, and completely brilliant.

The Assembly of the Animals, on the other hand, seemed like the opposite of clownish, to begin with at least. A small group of us were ushered into a long, low-ceilinged, dark room in the upper part of the Vaults, and seated in front of rows and rows of curtains. The first of these opened to show a table full of rickety scientific-looking equipment, which a man and woman in white coats began tinkering with. Various magnetic contraptions, inflating tubes and lumps of wax got moved around, nothing quite seeming to have an actual purpose, beyond sometimes making wonky sheep-like model animals move around the tables.

With creaking atonal loops of music coming from various little tape players the only accompaniment, it all felt a little dry. But as curtain after curtain was drawn aside, more tables and contraptions were revealed, ever-bigger animals – including huge inflatable ones – were disassembled and reassembled, puffs of smoke and flashes of light filled the room, and the sounds of the tapes and the contraptions grew into a cacophony. It’s the sort of thing that one might expect to see in some avant

garde haven like Cafe OTO, yet there was a wonderfully British bodged-together-in-a-shed eccentricity about it all that made it completely gripping for the kids, and really charming for us grown-ups.

Which brings us back to the privilege of seeing children’s theatre: the whole gritty wonderland experience of the Mini Vault Festival is something that I would want any of my grown-up friends to experience, kids or no kids. With the ramshackle surroundings, the food stalls and bars etc, the whole thing felt exactly like a festival should, and both the shows we saw – which variously tested the edges of taste and sanity – seemed like they could function just as well in some obscure corner of Glastonbury or Bestival at 3am as they did in the Vault at lunchtime. That sense of festival atmosphere as inspiration, and of there not being a hard border between what entertains kids and what keeps the adults happy and interested, is precisely what has always driven BFLF, and the whole experience left us all absolutely buzzing with new ideas and excitement about what it’s possible to achieve within this kind of family-friendly space… and left the kids with some happy and hilarious memories too.

We have two family tickets to give away to Simon Panrucker’s show this Saturday, Feb 27th at 11am at Mini VAULT Festival – one is on our Instagram https://www.instagram.com/p/BCGkrjtiIox/?taken-by=bflfevents and one on our Facebook https://www.facebook.com/bigfishlittlefishevents/posts/453702814820965.