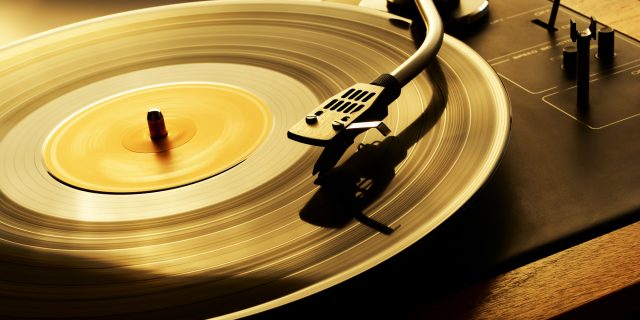 You know the drill now. Every Thursday regular BFLF DJ (he’s playing for us at Wahaca’s Day Of The Dead festival next month) and music journalist Joe Muggs recommends five new records available to buy that are worthy of your listening time. Whether you’re a fanatical collector or a casual club-goer who hasn’t bought a tune in years, there’s something for you here, even if it’s just to click ‘play’ on a stream. This time there’s two different radical updates of old school rave, some ruggedly bumping house, a bit of meditative pre-dawn drum’n’bass, and some of the best ambient dub you will hear this year. Get on it!

Here’s some new-school, but true-school, Yorkshire bleep’n’bass to celebrate the fact I’m off to Sheffield tomorrow to join in the No Bounds Festival. This, on Radio Slave’s Rekids label, is actually by Liam O’Shea who not only runs No Bounds and the fantasticly ravey Hope Works venue, but has somehow found the time to carve out a distinguished catalogue of hefty techno as Lo Shea. “Lets Roll” and its remix are very good, but it’s “Tundish” that I keep coming back too: it’s got bass, it’s got breaks and it’s got those proper warehouse bleeps that will hit the spot for anyone who ever loved that early WARP / Unique 3 sound. Buy it here.

Bristol bass-head Tessela’s 2013 “Hackney Parrot” was, and remains, one of the greatest ever re-imaginings of breakbeat rave circa 1992-3, a fantastically manaical rollercoaster of a track that still gets fairly regular play today, and is certainly destined to be a festival favourite for many years to come. But Tessela isn’t just about rave by any means, and he’s long done things like “Headland” which clips its breaks and samples into small snippets and loops them up into insistent Jeff Mills style techno. And for the remake of “Hackney Parrot” he’s done something similar to it: the new version is all about accumulating tension. Remixing a classic is always a risky business but this is different enough to make it worthwhile. Buy it here.

It’s been a little while since I’ve heard something that so perfectly captures the been-up-all-night combination of weariness and comfort so perfectly as “Sunrise”. MC DRS’s gently bluesy singing voice repeats “we’re just running from the Saturday sunrise, we’re just holding onto something that’s nice…” while Northern Irish drum’n’bass demigod Calibre’s beats, for all their velocity, seem to just float by in the background, letting his chords hang around you like smoke. “Broken Wings” is DRS’s ode to the frustrations of being caught among people clambering over one another to realise fraudulent ambitions: again it’s bruised but hopeful, and the two tracks together make a perfect brace of dreamer’s drum’n’bass. Buy it here.

As Prurient, Dominick Fernow is responsible for the most harrowingly brutal neo-industrial music of the last few years. And his Rainforest Spiritual Enslavement ambient alias can be as terrifying as the name suggests, inspired as it is by all kinds of tropical withcraft and fever. But dark as it is, there’s actually something deeply comforting about these tracks: in particular the 37-minute “Jungle is a Shapeshifter”, with its second half underpinned by a monumental sub bass dub pulse, is as envelopingly blissful as ambient music gets, and I know of a couple of people who attest to its powers in pacifying babies. So if you don’t mind risking black magic curses on the little ones, there’s your childcare tip for the week right there. Buy it here.

Sometimes it’s super refreshing when something’s genre is just listed as “house”. New York born and bred producer Manik really understands when not to gild the lily: everything on this album is back to basics, rugged and entirely about the groove. Sometimes it’s high-tech, sometimes it’s disco-ey, and as with all the best New Yorkers – think Todd Terry and Armand Van Helden – there’s a hip hop swagger in there too. But at the end of the day it’s HOUSE and sometimes that’s all you need. Buy it here.