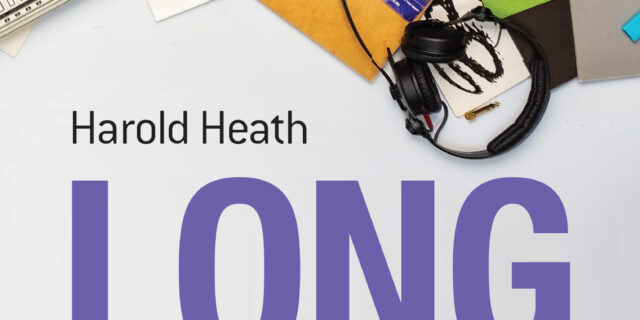 Harold Heath is a former DJ and producer who has just written a book about DJing. ‘Long Relationships: My Incredible Journey From Unknown DJ to Smalltime DJ’ will be published in May this year and tells the often funny story of what life is like for all the DJs who never achieved top-level success. To mark World Book Day, Velocity Press is giving 10% off all books – enter wbd10 at tills.

1. What were the tunes that first made you fall in love with dance music?

It would be the Tommy Boy back catalogue. Early Electro and Hip Hop like ‘Renegades of Funk’ and ‘Planet Rock’ by Afrika Bambaataa & the Soul Sonic Force, ‘Wlidstyle’ by Timezone, ’Space Cowboy’ by the Jonzun Crew, that kind of thing. In the book, I mention the exact moment when hip hop arrived in my life. It was around 1983 and a kid in my class at school had seen break dancers and body poppers on John Craven’s Newsround the night before. He was trying to do that move when you simulate an electric current going through your body. Within what seemed like weeks ‘Buffalo Gals’ from Malcolm McLaren and The World’s Famous Supreme Team and ‘(Hey You) The Rock Steady Crew’ had arrived and break dancing was everywhere. Me and my mates fully embraced Hip Hop, formed a crew and I developed the fastest backspin in my home town of Bury St. Edmunds, a fact I am perhaps overly proud of to this day.

From then on, dance music and its associated culture would be where I lived, from Electro and Hip Hop, through Soul, Jazz-funk, Go-Go, Rare Groove, House, Acid, Rave, Techno, Jungle, Drum & Bass and so on.

2. Has DJing broadened your taste in music or focussed it?

A bit of both. As a DJ you tend to specialise in one genre, so you become super-focused on whichever bit of the dance music continuum that you work in, but also you spend so much time auditioning and sourcing music that inevitably you run into stuff from outside your comfort zone that you find you like. And then other DJs are forever recommending new music to you. Also, if you play house music every weekend as your job, it’s quite likely that during the week you might fancy something else to listen to. Additionally, there’s a sense that there’s just so much good stuff that I’ve yet to discover, genres I’m dimly aware of but have not had the time to properly delve into, so there’s always an underlying drive to discover and to make sure I’m not missing out. I think this drive is part of what makes someone want to become a DJ.

The very best DJs are a unique combination of music obsessive, technical nerd, shaman and children’s entertainer. The underlying theory to being a great DJ is that in all the world of recorded music, there is probably a tune that is as near perfect as possible for any particular moment and crowd and it’s the DJ’s job to be able to predict what this is and then play it. The perfect tune might be a huge anthem that everyone in the club knows or some obscure underground thing, but the point is, to be a really good DJ, you need to have loads of really good music, play it with exquisite timing, and preferably do so with technical perfection. No pressure!

4. What genres/tracks mix together unexpectedly well and which are always a car crash?

A problem I would find from time to time with mismatched tunes was when I tried to mix records from different decades, say a house tune from the 2000s with an old disco or funk tune from the 70s. While the blend might sound OK at home, when you do it on a club sound system, the older record sometimes sounded weak in terms of its sonics, lacking the low-end thwack and all-frequencies-precision-engineered production of a modern track. So you’d end up dropping some absolute classic banger of a disco record and be surprised that it would fall flat simply because it didn’t have the sonic impact of a contemporary record. But you learn how to compensate for this kind of thing with EQ and volume levels etc.

5. What advice would you give to a budding DJ starting out now?

All the usual stuff I guess: do it because you love it, follow your heart, not fashion, try and not be a dick, those kinds of things. But the greatest single piece of DJing advice, and it’s not mine, cleverer people than me have been saying this for years, is never let the mix trump tune selection. It’s better to do a rough transition to the right tune, than a perfect transition to the wrong tune. Always. As soon as a DJ prioritises neat and tidy transitions over selection, they’ve lost it.